We talk to Sage Goodwin, History DPhil student and recipient of a GHoC project 4th year doctoral studentship for 2020-21, about her current research and ideas for collaborating with the project, and her interests beyond academic life! 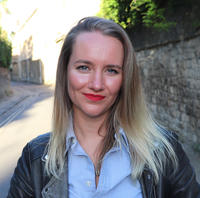 What is your academic background and how did this lead you to an interest in the global history of capitalism?

My journey to a doctoral studentship with the Global history of Capitalism has seen me travel the vast distance from a History B.A. at St. Hilda’s, to a D.Phil. at Brasenose (via Univ) by way of a M.St. in U.S. History at Balliol.

The core of my academic interests has always been Black and white race relations and how racial groups come to form their ideas about one another under conditions of segregation. My undergraduate thesis explored the role of the domestic service relationship in Apartheid South Africa and my first extended essay during my masters looked at the integrating impact of Rock’n’Roll in mid-century America. Through exploring these topics it became clear to me that economic concerns played a fundamental role in determining when, where, and how Black people were allowed to enter white spaces.

There are few spaces whiter than the televisual landscape of 1950s America both on screen and behind the scenes. Yet the appearance of African Americans on the nation’s television sets on the Evening news was crucial to the successes of the modern civil rights movement. My Masters dissertation project focused on how CBS News documentaries framed the fight for racial equality for a predominantly white national audience. Moving beyond the technological determinism of many accounts of television’s role in the freedom struggle I aimed to consider the news as an industry and its broadcasts the result of decision-making by individuals influenced by political interests and economic agendas.

However, it wasn’t until I met Professor Chris McKenna during an M.St. seminar on Business History and he recommended I consider looking at the corporate records of television networks for source material that my D.Phil project about the relationship between television news and the African American freedom struggle began to crystallise. Archival trips all over the U.S. from Madison, Wisconsin to Austin, Texas in search of the personal papers of television broadcasters, producers, and executives have helped me look under the hood of network television. How America came to understand the story of its race relations through the Evening news on CBS, NBC, and ABC is inextricably tied to the business imperatives of these corporations.

Tell us a bit more about your current research and what aspect of this you would like to develop into a GHoC case study?

My D.Phil thesis explores the relationship between television news and the struggle for Black freedom from the Brown v. Board of Education Supreme court desegregation ruling in 1954 to the assassination of Martin Luther King Jr. in 1968. The race and communications revolutions of the mid-twentieth century were inextricably linked: each profoundly influenced the development of the other. The story that television news coverage told generated sympathy from white viewers, but limited their conception of what constituted racism. This shaped the course of the struggle for Black freedom in ways more nuanced, powerful, and long-lasting than historians have previously appreciated. Moreover, covering ‘the race beat’ determined the evolution of the network news industry, influencing network policy on everything from hiring processes to reporting practices.

One aspect of my research concerns the battle to desegregate network television newsrooms. I would love to develop a case study which explores how networks only addressed racial discrimination within their own companies when it became clear that it would be financially advantageous to make an outward show of supporting America’s Black population. Concerns about corporate reputation were central to how the networks responded to concerns about race in the fifties and sixties.

I am extremely interested in how issues of diversity manifest in a corporate context. My proposed case study on network television would explore how a company can consider diversity within its staff as a business interest due to a moral imperative or the political consideration of how optics can affect corporate reputation. But I am also fascinated by how businesses can consider diversity within their personnel as fundamental to improving product quality and hope to write a future case study on this topic. 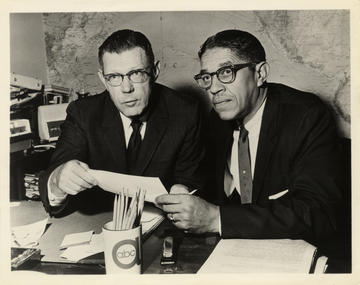 What have been your biggest influences in relation to your research?  Do you have any recommendations for books, articles, media related to this area?

In the early stages of thinking about this project I was interested in how the intersection of race and media moulded American society and came across Sasha Torres’ Black, White, and in Color: Television and Black Civil Rights. Her argument in her two chapters on the news, that it was in the interest of the networks with their perpetual quest for ratings and resulting need for a unified audience, to make common cause with the civil rights movement, first inspired me to consider more deeply the role of television news. There is surprisingly little written on the topic so Aniko Bodroghkozy’s, Equal Time: Television and the Civil Rights Movement has been my Bible for this project. The way her work moves beyond the conception of television, the media, or the networks as abstractions and instead considers the real people and organisations with corporate, racial, and ideological interests behind the news has been foundational to my approach.

More broadly I recommend anything and everything Brian Ward has written as I love the way his work weaves together an analysis of race, gender, media, and social politics and takes popular culture as a serious category of historical study. His edited collection Media, Culture, and the African American Freedom Struggle is a must for anyone interested in this area.

How has your life as a researcher changed over recent times?  Do you have any advice/tips for other research students?

Despite all the downsides of pandemic life one thing I have found extremely useful is how the move to online life has made it easier to access people and events in other parts of the world. I have been able to attend online talks and present at online conferences and workshops that otherwise wouldn’t have been an option had they taken place in person in other parts of the UK, Europe and America.

The combination of lockdown and video calling technology has also allowed me to conduct a host of oral history interviews with former news producers in America who covered civil rights in the 1960s which has been amazing for my project and just generally a very cool experience. My advice to other research students is make the most of the opportunities that the virtual world has opened up.

What do you like doing when you’re not buried in your research!?

I’m really into cultural criticism. Most of the time this manifests in listening to a ton of podcasts but this term I’ve also organised the Rothermere American Institute’s film discussion series The RAI Goes to the Movies. I’ve put artists and filmmakers in conversation with academics to talk about movies by African American filmmakers that have changed the Hollywood landscape. We’ve had a really great set of discussions and even had the Oscar-winning director Barry Jenkins make a surprise appearance at our session on his film Moonlight!